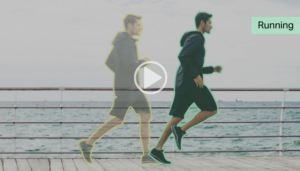 As videos have become easier to distribute and consume, we have seen considerable developments in machine learning algorithms that can analyze their semantic content. Video classification has a wide range of use cases, most notably search engine optimization, computer vision and summarization.

Compared to images, videos also have a time dimension. In essence, they are a sequence of individual images, which makes image classification a solid baseline to build upon. With video, we can typically make the assumption that subsequent frames in a video are correlated with respect to their semantic contents. 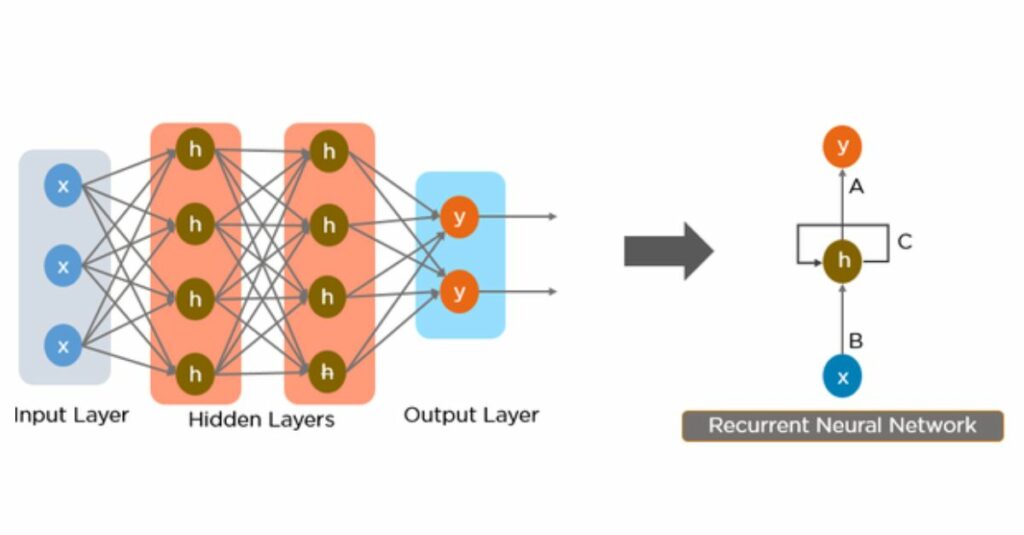 To achieve state-of-the-art performance in image classification, researchers have leveraged deep convolutional networks (CNNs). This architecture has been demonstrated as an effective class of models for understanding content on image recognition, segmentation, detection and retrieval. The key enabling factors behind these results were techniques for scaling up the networks to tens of millions of parameters and massive labeled datasets that can support the learning process.

To perform image classification, you need to input an image to a convolutional neural network (CNN) such as Imagenet, obtain the predictions from the network, and have it select the label with the largest corresponding probability. 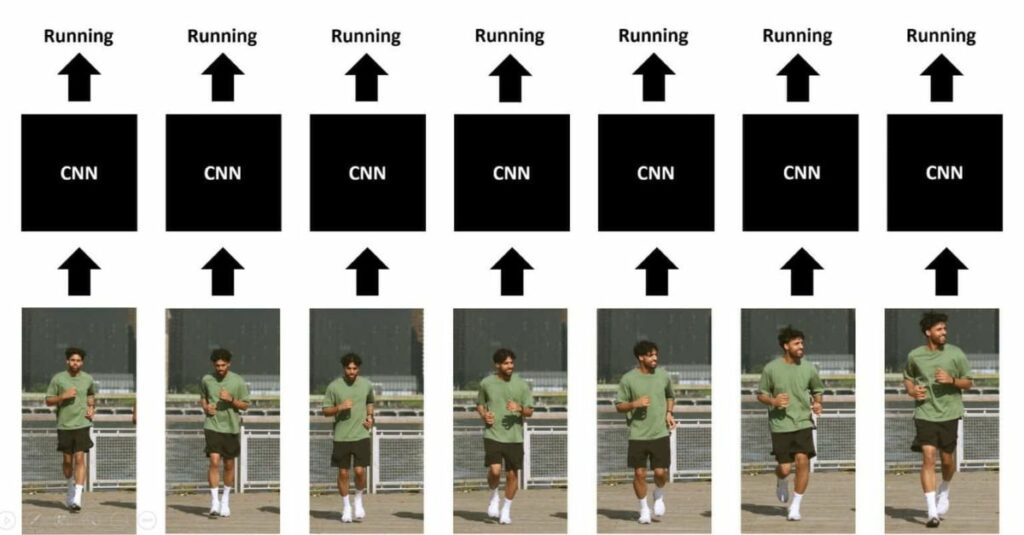 Since a video is just a series of frames, a naive video classification method would be pass each frame from a video file through a CNN, classify each frame individually and independently of each other, choose the label with the largest corresponding probability, label the frame, and assign the most assigned image label to the video.

Training neural networks on video is a very challenging task due to the large amount of data involved. Typical approaches take an image-based network, and train it on all the frames from all videos in the training dataset.

However, applying simple image classification to video classification will produce “prediction flickering”, where the label for the video changes rapidly when scenes get labeled differently. To solve this and fine-tune the network, you can use a rolling prediction average to smooth over any sudden changes between labels by computing the average of the last n predictions and choose the label with the largest corresponding probability. The assumption here is that subsequent frames in a video will have similar semantic contents. If that assumption holds then we can take advantage of the temporal nature of videos, assuming that the previous frames are similar to the current frame. The averaging, therefore, enables us to smooth out the predictions and make for a better video classifier.

A successful video classifier does not only provides accurate frame labels, but also best describes the entire video given the features and the annotations of the various frames in the video. For example, a video might contain a tree in some frame, but the label that is central to the video might be something else. The granularity of the labels that are needed to describe the frames and the video depends on the task.

If we are able to take advantage of the temporal nature of videos, we can improve our actual video classification task results using more advanced neural networks architectures such as Long short-term memory (LSTMs) and Recurrent Neural Networks (RNNs). They are suited for time series data but they are also resource-hungry and time-consuming when it comes to training over thousands of video files. 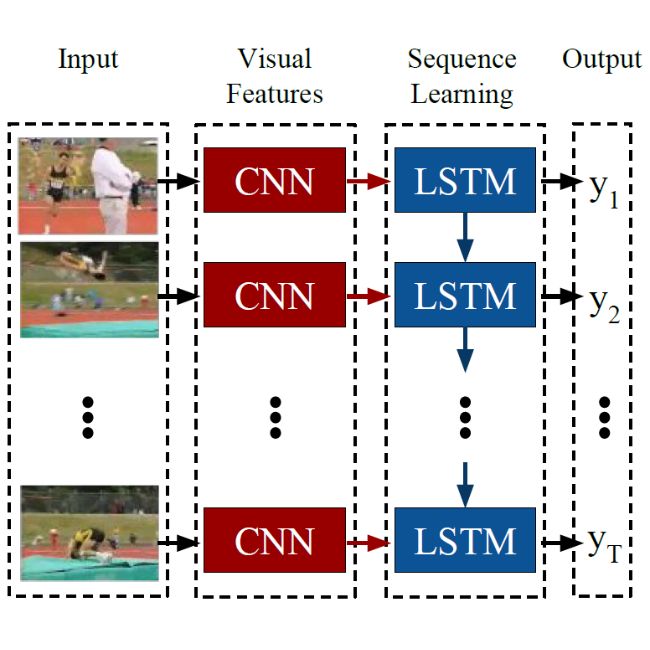 By using a combined CNN-RNN architecture, we can get the best of both worlds. The images of a video are fed to a CNN model to extract high-level features. The features are then fed to an RNN layer and the output of the RNN layer is connected to a fully connected layer to get the classification output. The goal of RNN models is to extract the temporal correlation between the images by keeping a memory of past images.

CNNs require extensively long periods of training time to effectively optimize the millions of parameters that parametrize the model. This difficulty is further compounded when extending the connectivity of the architecture in time because the network must process not just one image but several frames of video at a time. To mitigate this issue, we show that an effective approach to speeding up the runtime performance of CNNs is to modify the architecture to contain two separate streams of processing: a context stream that learns features on low-resolution frames and a high-resolution fovea stream that only operates on the middle portion of the frame.

Similarly, because CNNs require inputs of standardized length, another challenge of training video classifiers is figuring out a way to feed the videos to a network. Since a video is an ordered sequence of frames, we could just extract the frames and put them in a 3D tensor. But the number of frames may differ from video to video which would prevent us from stacking them into batches. As an alternative, we can save video frames at a fixed interval until a maximum frame count is reached.

From a practical standpoint, there are currently no video classification benchmarks that match the scale and variety of existing image datasets because videos are significantly more difficult to collect, annotate and store.

Human Activity Recognition refers to classifying or predicting the action performed by one or more people. It is a type of time series classification problem where you need data from a series of timestamps to correctly classify the action being performed. In contrast with object detection, human action recognition is based on video files, where the ML algorithm needs a series of data points to correctly predict the action.

Imagine a person doing a backflip. If we only took a single frame of that person mid-air, a deep learning model may inaccurately label it as ‘falling’. However, feeding a whole video with a person jumping, flipping, and landing will offer the model enough information to make an accurate prediction.

The model is also learning the environmental context. So with enough examples, the model learns that a person with a running pose on a football field is most likely to be playing football, and if the person with that pose is on a track or a road then he’s probably running. However, it is often the case that a trained model will have learned to classify videos by learning environmental context instead of the actual action sequence, leading to over-fitting. Consider the action of Opening a door and Closing a door. In both actions, the frames are almost the same. The difference is the order of the frame sequence, such that we need temporal information to correctly predict these actions.

We can classify human activity recognition into three main categories, such as:

These video classification methods represent different approaches for labeling a short video clip with the human Activity being performed in that video clip. 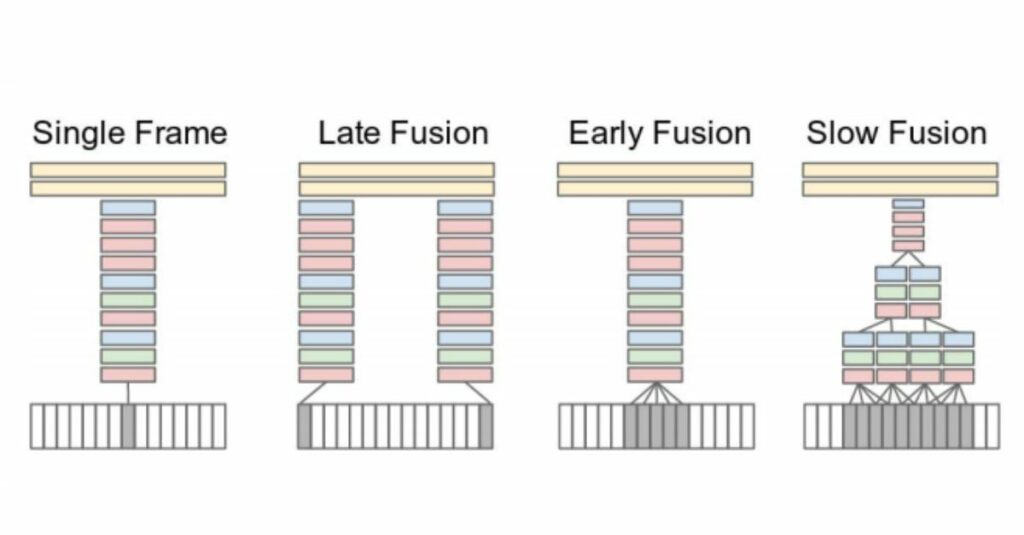 Considering that video classification machine learning algorithms are highly dependent on labeled data, the preparation process will have a considerable impact on the performance of the algorithm.

Human activity recognition is one of the most important use cases for video classification, and will be used as the example for preparing data.

Human activity recognition can be divided into three main categories. These include

It’s also worth noting that major activities such as playing musical instruments and sports deserve their own categories for the purpose of training a video classification model.

Data consistency – the main challenge for getting a suitable dataset for video classification is consistency, where the selected video clips have the following characteristics

One of the most used pre-labeled datasets for human activity recognition is the UCF101 dataset, which is known to not contain extreme variations in objects and actions across frames.

To convert the video data into a trainable format, each video needs to be converted to an image format, such that every frame can be processed and labeled by itself, especially for single-frame CNN methods. This needs to be accompanied by a CSV file which contains referencing information for the videos, such as their class, whether they are a testing or training input, and frame count.

Following industry best practices, test and training data should be split into 80% for training and 20% for validation, where data should be randomized across the two to ensure a fair distribution of classes and prevent any spilling from the test set into the training set.

For large-scale video classification use cases which go beyond the UCF101 and other open video datasets, iMerit offers video labeling services to provide you with a consistent flow of expertly-labeled data. Our tried-and-tested methodology and long-term talent pool ensure that we keep consistent labeling practices across time and projects.

If you’d like to learn how iMerit can augment your machine learning projects, please contact us to talk to an expert.