iMerit was proud to celebrate our 5th anniversary earlier this week in an emotional event held in Kolkata. iMerit’s sister company, the Anudip Foundation was also celebrating their 10th anniversary. While reflection on the great work that the teams at both organizations accomplish was the main theme of the celebration, there were undertones of emotion fueled by the social impact stories heard throughout the day.

The anniversary event began with the tales about the birth of Anudip Foundation, a decade ago.

“What an incredible journey! When I was in Sundarbans and seeing the plight of a large number of people who needed jobs, I felt helpless. I was an NRI, a telecom engineer, a city guy and clueless about how to bring a change in the lives of the marginalized society. And here we are today, it was a journey of learning, working together and a journey of a lot of people who believe in us!”, Dipak Basu, chairman, and CEO, Anudip recalled the story of Anudip on an emotional note.

Anudip is the brainchild of Dipak and Radha Basu, who decided to shift their focus from Silicon Valley, back to India where they are from. Anudip is a non-profit organization with a mission to generate sustainable knowledge-economy livelihoods for poor youth and women by 2020 through market-aligned skills training. iMerit was launched five years later to serve as a sister organization to offer high-quality employment in the digital economy. 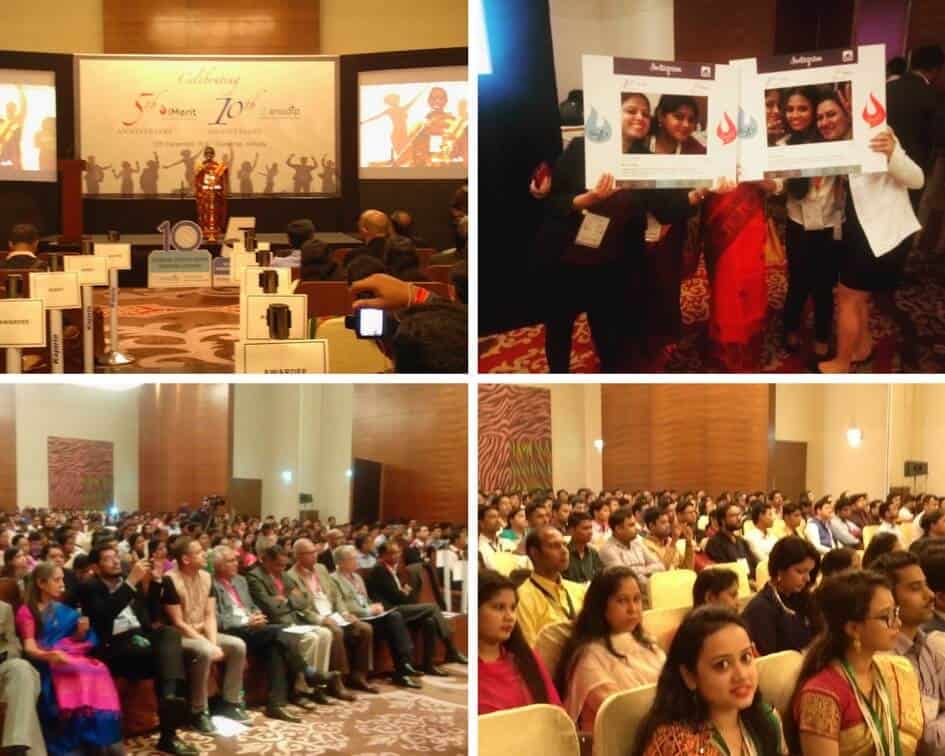 Dipak Basu, shared his experience, “We, at Anudip, are privileged to serve our beneficiaries. They are helping us in more than one ways. The two reasons behind this contribution are the confidence that our donors pace in us, and our employers, which ensure that students are trained, the way they want them, by telling us how to train them, Market Aligned Skills Training.” He unveiled the new brand identity of Anudip Foundation and congratulated the teams for their unmatched dedication and constant motivation to reach here.

“We are proud of is the tremendous progress, every single person has made. As Anudip is to donors, iMerit is to clients. And for us, when a client is happy and delighted, there is nothing better we can achieve. The delivery teams strive hard every time a project is on board to match the same quality and timeline”, adds Radha Basu, CEO, iMerit Technologies in her introductory speech.

The delegates attending the celebration included Sal Gambianco from Omidyar Network, Santosh Ramdoss from the Michael & Susan Dell Foundation, Major Vandana Sharma, and the board of directors of both Anudip and iMerit Technologies. Delivery teams from Anudip and iMerit centers across the ten states were also making their presence felt with the regional dance performances.

The event featured speakers, thinkers, and influencers of the society who shared their perspectives for the future of tomorrow.

The panel session was headed by Mr. Pradeep Kakkar, Director of Anudip Foundation.  The topic of the panel discussion was “Skill development in the time of change”. The panelists included Jai Natarajan, VP Technology and Marketing at iMerit, Major Vandana Sharma, a society changer, TEDx speaker and change-maker, and Mr. Santosh Ramadoss of the MSDF Foundation.

The panel addressed the trending issue of skill development among youths resulting in a radical transformation of skills. Over time, new technologies have emerged and while they have replaced jobs, they’ve also created more new jobs than those eliminated, and these new jobs have been of a higher value. The kind of jobs will rule the future and the future workplace, considering the pace of constantly changing technology will be based on innovation and automation.

If you can learn new skills, expand your capability and see new possibilities, then uncertainty around the future of work becomes your friend. Technology without human intervention is spineless and hence constant upskilling is the key to stride past the outdated approach.

The keynote speaker of the event was Sal Gambianco, Omidyar Network. While he was at the ceremony, he shared his insights about India and shared his valuable experiences about his journey in India. Omidyar Network strives hard to reduce any form of human suffering through innovation and technology.

He further added, “India, being a diverse nation comprising of a perfect amalgamation of various culture and hence ideologies. When such varied inclusion, a task-force of one million young minds and energy collaborate, this demands immaculate execution and attraction engagement. India is a multi-centric country which means an encounter with immense diversification… Data, knowledge, information, and wisdom are four pillars which define our understanding, a major aspect of judgment.” He added that “one should be imparted this sense of judgment when it comes to skills training. A holistic way of learning is to remove noise from knowledge. Upskilling should not result in the change of core-self.”

The best performers and leaders of the organization were awarded and appreciated. Some of the featured individuals, Mr. Ganesan Natesan, and Ms. Alaknanda Roy were given felicitation awards, and Mr. Anindya Chattopadhyay, co-founder, iMerit and Head of L&D for his prodigious contribution towards the organization from its inception.

The event concluded with the reflections from both the founders, Radha Basu and Dipak Basu. It examined the path ahead of the current scenario, expansion, and future of work.

If there was a unifying theme, it was the sheer diversity of the impact taskforce from all across the nation.